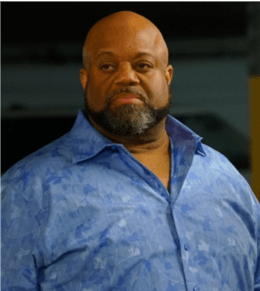 Nominated for a 2021 Daytime Emmy for Outstanding Actor in a Daytime Program for his portrayal of Hector in $TACK$, you may recognize Mark Christopher Lawrence from his series regular role as Big Mike on NBC’s CHUCK or from studio films like Pursuit of Happyness, Terminator II and Fear of a Black Hat or possibly from his Drybar comedy special clips that have amassed over 18 million views. The veteran actor and stand-up comedian is the 2012 recipient of the San Diego Critics Circle’s Craig Noel Award for Outstanding Actor Of The Year. He’s an international headliner that has worked with the likes of Sinbad, Jerry Seinfeld, Rodney Dangerfield, and Jeff Foxworthy. This past holiday season Mark appeared in Christmas movies for “One Fine Christmas” for the OWN network and Deinstitutionalized Films’ “2nd Chance For Christmas.” Mark can also be seen on BLACK JESUS, recurring on PureFlix’ Malibu Dan The Family Man, Disney Channel’s original TV movie Life Is Ruff, Lab Rats, Good Luck Charlie, Heroes, Weeds, My Name Is Earl, Reba, Grounded for Life, Crossing Jordan, Amazing America with Sarah Palin. He just released his hilarious talk show PURE COMEDY on Pureflix.com. Mark also served as a consulting producer on $TACK$ and $TACK$ was his second Emmy  nomination. 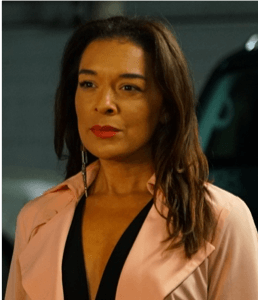 Diahnna Nicole Baxter is a ruthless storyteller who addresses trauma as an opportunity for transformation through storytelling. She embodies this in her betrayal of Magdalena in $TACK$.The Duke University graduate is a pioneer of the web. She co-created, co-wrote and starred in SATACRACY 88, the first web series to win an Emmy Award. She also took home the People’s Voice Webby Award for the series.Diahnna has been on a multitude of television shows: Scandal, Jane the Virgin, American Crime Story, The Fosters, Tell Me Your Secrets and True Blood to name a few.She wrote, produced, and starred in her first short film, Cowboy’s Girl and her solo directorial debut, Epigenetics, is hitting the festival circuit. Beyond creating stories, Diahnna embodies the transformation of body, mind, and spirit as a certified Kundalini Yoga Teacher and transformational coach.

Calvin C. Winbush, a native of Detroit, Michigan and graduate of Michigan State University started acting while living in New York City to pursue music production and songwriting.While working on the set of Lipstick Jungle (2008) for a day job, he received advice and encouragement from Timothy Busfield and Brooke Shields to pursue acting. After enrolling in acting classes at the Sledge Project Studios as well as studying under the instruction of Wynn Handman, Calvin began booking work on range of projects in New York City. Now relocated to Los Angeles, Calvin continues to chart a steady course in the industry as a dynamic, talented and professional working actor appearing in Whiplash, New Girl, Nashville, Straight Outta Compton and This is America.

Jamie Burton-Oare graduated from Howard University and immediately moved to New York City to pursue her acting career. Her hard work paid off commencing with her being accepted into the prestigious Royal Academy of Dramatic Arts (RADA) in London for their Shakespeare Acting course.Jamie landed her first starring role in the multiple award-winning feature film, Amour Infinity. She followed that up with a starring role in an American Film Institute thesis film titled, Shooter. Shooter was accepted into the newly developed Short Film Buyer’s Corner at the world-renowned Cannes International Film Festival. Shooter won first place at the Hatch Film Festival and was a finalist at the American Black Film Festival, HBO Short Film Competition 2004 at the American Black Film Festival. Jamie can also be seen in episodes of CSI:NY and Eleventh Hour.

Tarnue Massaquoi, was born in Brooklyn, NY but at the age of four relocated to Liberia, West Africa. He lived there for 12 years including during a civil war until migrating back to New York at the age of 16. Tarnue exudes this rich background in every moment he’s on screen as Reub in $TACK$.After graduating from Michigan State Tarnue focused on building his career on stage, in film and on television. That process began with even more studies and he is graduate student from the Joanne Baron/D.W Brown Acting Studio. Tarnue’s hard work and studies have paid off with appearances in major film and TV projects like: Terminator Dark Fate, Seal Team, The Rookie, Boomerang, NCIS: Los Angeles, Criminal Minds: Beyond Birthday and Days of Our Lives to name more than a few.  Off screen, Tarnue enjoys being part of FLIP, Father’s Lifetime Involvement Program, that helps unite, encourage and assist fathers strengthen their relationships with their children.

JaDarrel Belser, JD to his friends, brings a quiet and deep intensity to the role of Momo in $TACK$. JD admirably served his country for five years as a Hospital Corpsman in the US Navy. His TV credits include: Syfy’s “MegaShark Vs Crocosaurus” and “Geeks Who Drink”, Vin Diesel’s “The Ropes”, HBO’s ‘Insecure’ and Kendrick Lamar’s ‘Humble’ music video. His commercial bookings include: Geico, Tekkan, and Kelley’s Blue Book. JaDarrel is a writer and host for the pop culture site ‘God Hates Geeks’, the lead contributor to the popular blog ‘Belser-Verse’. JaDarrel is also currently a member of the sketch show ‘ TMI Hollywood’ and co-host of the pop culture podcast ‘Droppin That Culture with JD and AJ’.